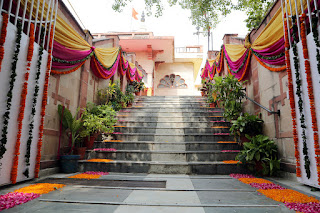 After the highly successful Chalo Ayodhya 2017 under the aegis of Vishwa Hindu Parishad and Mr Sohan Goenka and friends from Hongkong, AroundDelhi.com had the privilege of organising the second addition of the tour- #ChaloAyodhya2018 from 10th-12th July 2018.

The programme started from Vishwa Hindu Parishad International office at RK Puram Delhi with registration and welcome of guests. There were 120 guests from India and across the World from 15 countries lead by Shri Sohan Goenka -President of World Hindu Economic Forum,Hongkong. The aim was to request the Central and the State Govt of UP to expedite the process of clearing the decks for making of the Ram Mandir at Ayodhya. 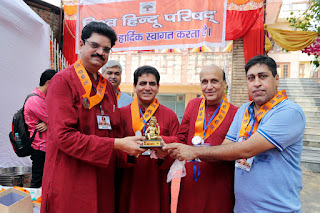 The meeting was addressed by Shri Milindji Parandey,General Secretary VHP, Shri Champat Rai ji Vice President and other VHP dignitaries. Mr Anand Goel Asst General Sec of VHP was the sanchalak for the meeting.
After a wholesome lunch the group was shifted to Hotel Hyatt Regency for stay.

After a sumptuous breakfast at Hyatt Delhi, the group was transferred to the Airport in two groups to catch a flight to Lucknow. On reaching Chaudhary Charan Singh Airport, the group was shifted in A/c buses to Lebua Hotel for lunch.
Guest relaxed at this heritage property and enjoyed a delicious veg lunch. 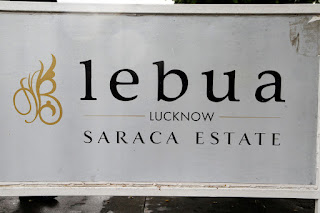 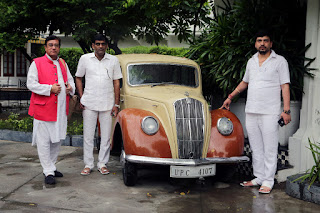 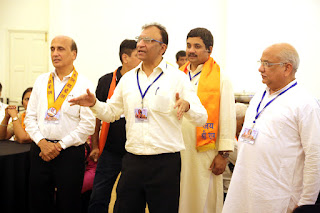 
After lunch the whole group was excited to meet Yogi ji at the CM house and boarded the buses to reach CM house at Kalidas Marg. 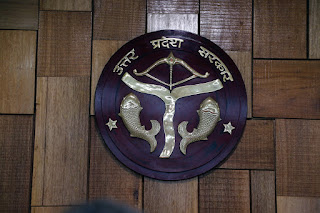 Every body took their seats in the elegant hall at CM house and waited patiently for Yogi ji's arrival.


The guests were enthralled by some melodious bhajans by some from the group. 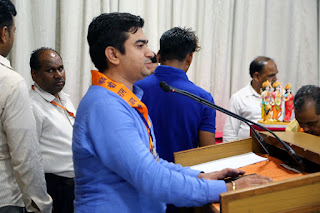 And finally Yogi ji blessed the meeting with his divine presence and mesmerized all  with simple but effective words. He welcomed the group and enlisted the work done to promote Ayodhya as a religious and tourist destination. He invited the group to attend the Kumb at Prayag in January 2019 and also to invest in the state. 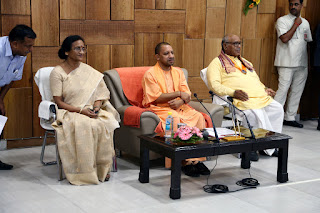 Yogi ji and other dignitaries were presented with auspicious idols by Mr Sohan Goenka, Mr Raju Sabnani and Mr Suresh Pansari from the Chalo Ayodhya group. Auspicious Buddha was presented to Ms Rita Bahuguna, Tourism Minister UP by the ladies of the group. Mr Sudesh Agarwal and Mr Ramesh Lohia presented a shawl to Yogi ji from IVF. 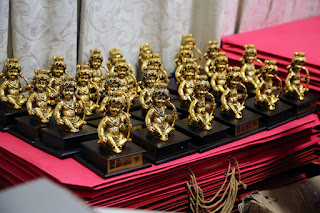 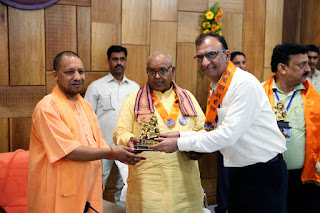 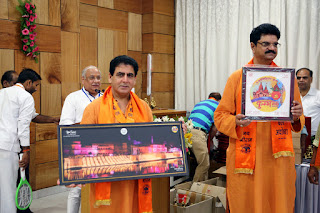 The meeting concluded with a hearty dinner served to the guests at the CM house. 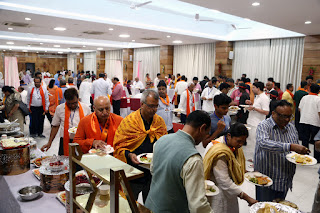 Guests started their long journey to Faizabad, a twin city of Ayodhya for their night stay. Reached past midnight and checked in to prepare for a early rise day next morning.

Day 3 started with an early breakfast at 6 am and by 7 AM guests were on their way to Karsevakpuram, Ayodhya. The first stop was darshan of Ram lalla at Ram janam bhoomi and the excitement and joy on the faces of the Ram bhakts had to be seen to be believed. The cacophony of Jai Shri Ram and Ram Mandir reverberated around the Ram Janam Bhoomi site and the bhagva color filled the whole place. No mobiles, wallets, belts, purses etc. are allowed inside. One 'jhalak' of Ram lalla was enough to make the journey from across the World to  Ayodhya 'saarthak'. Jai Sri Ram.

Next stop was the Saryu Ghat, where the members did pooja and fed the Gau mata.

Other stops were the Hanuman Garhi and Karyashala. Hauman garhi is build like a fort and takes 76 steps to reach. According to legends, Lord Hanuman lived here in a cave and guarded the Ramkot, or the birthplace of Ram.

Karyashala is hte place where work is going on for many years of carving out the pillars for the Ram Mandir once the permission of construction of the Mandir goes through. Workers from many states work
here for 12 hours a day to give shape to dream of many Hindus across the World. The place also stores more than 2 lac bricks sent by Ram bhakts from across the country for the making of the Ram Temple. 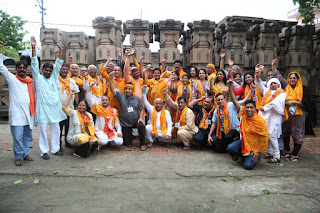 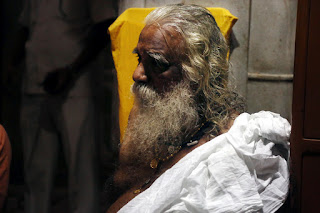 
And finally it was back to Lucknow after a simple and tasty lunch at VHP office Ayodhya. 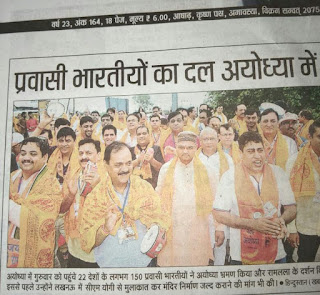 Mail us at arounddelhi@gmail.com if you want to join the next Chalo Ayodhya group to are interested in other religious tours arranged by AroundDelhi.com on group or individual basis.
Join our customised Ayodhya group, give us your group size and dates, we will do the needful to arrange your group on a turnkey basis. Mail or call us.